72: Leaders With Heart Understand That It Takes A Team To Achieve

In this short episode, Heather speaks directly with listeners about the power and importance of team collaboration as an effective leader. She shares some personal stories to illustrate that leaders are always looking for ways to include more people in their ventures. These leaders praise those without being threatened, inspire others to row in the same direction and nurture people along the way.

Recently, I’ve been talking to my second eldest son about the concept of leading others.

The younger brother wants to do civil air patrol. He is someone who could do very well at the academy, but he doesn’t like to depend on others to get things done. He doesn’t like to work with and through others to accomplish his tasks.

On the other hand, his older brother has natural leadership tendencies. He looks out for others and serves others naturally. He nurtures the people around him, looks for an opportunity to praise those around him when they do well, and he isn’t fearful at all of them succeeding or moving ahead of him. 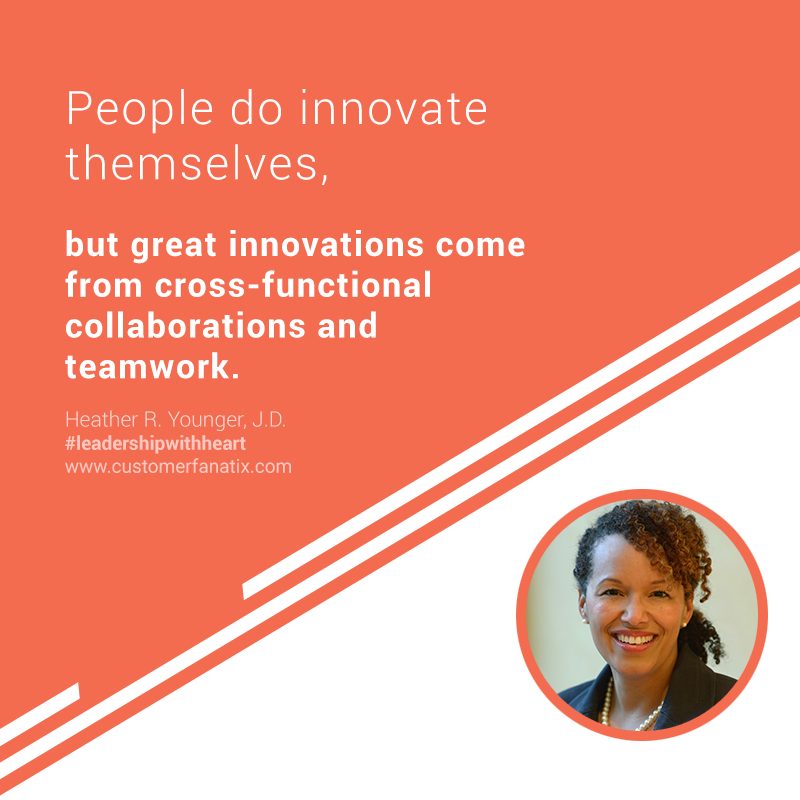 Leaders have to work with and through other people to accomplish things. – @Customerfanatix #leadershipwithheart Click To Tweet

If and when you can harness the power of team moving in the same flow, you’ll be more effective. – @Customerfanatix #leadershipwithheart Click To Tweet

Just the other day while we’re on vacation, the younger brother was in a kayak with his father when he said, “I was really nervous to be in there because you really have to move at the same rhythm in order to get anywhere, or else you sit still or you go backward and the tide pulls you back in.”

He said, “But I would just rather be in a kayak by myself.”

What he said is really the crux of the struggle of a leader. Leaders have to work with and through other people to accomplish things. In fact, the sign of a really effective leader is one who can inspire those around him or her to achieve great things inside of a team.

People do innovate by themselves, but great innovations come from cross-functional collaborations and teamwork. Leaders who foster that type of environment are much more effective in the workplace and of course at home.

I kept on tapping the shoulder of that younger son to say, “Listen. Yes you have mental strength. You are intelligent. You like structure and you’re a very great problem solver. But, you have to empathize with others. You have to put yourself in the shoes of others and you have to be okay with them not being perfect. You have to move forward when the waves are pulling against you. You have to work with the other person in the kayak.”

Consider your role as a leader. How well do you row in the same direction as the people on your team? How effective are you in getting them to see the importance of working together as a team? If and when you can harness the power of team moving in the same flow, you’ll be more effective.

I’m not saying that people cannot go in different directions and that we all need to be completely homogenous. That’s not what I’m talking about here.

If you have the service mindset and if you have that “We can do more together than alone” concept in your head as a leader, you’re going to move those waves in the direction you want them to go. You will be more effective.

If we don’t continue to grow ourselves and we don’t promote these ideas in the world, the knowledge that we have stops at us. – @Customerfanatix #leadershipwithheart Click To Tweet

We cannot get the word out and help other leaders grow if we aren’t sharing these messages with other people. – @Customerfanatix #leadershipwithheart Click To Tweet

The sign of a really effective leader is one who can inspire those around him or her to achieve great things inside of a team. – @Customerfanatix #leadershipwithheart Click To Tweet