73: Leaders With Heart Help Their People Step Into The Best Versions Of Themselves

In this episode, Heather features Garry Ridge, CEO of the WD-40 Company. Garry speaks about his leadership journey: a time when he was not the best leader he could be, what he did to come out of it, and how he transformed a company to greatness by focusing first on people, and maintaining a learning culture.

Garry co-authored a book with Ken Blanchard and moved his organization from $200 million to $2.2 billion in revenues– all by focusing on growing people and helping them step into their best selves.

Enjoy listening in to Garry’s genius!

Garry Ridge is passionate about learning and empowering organizational culture. That’s why he helped establish WD-40 Company when he joined 1987 and served as its President and CEO 10 years after. Indeed, Garry’s vision and leadership have positively impacted the WD-40 Company in both measurable and immeasurable ways.

A native of Australia, Garry served in advisory roles for the Australian Marketing Institute and the Australian Automotive Aftermarket Association. Currently, he serves as a member of the board of governors of The San Diego Foundation, and the University of San Diego’s School of Business Administration.

Garry is an adjunct professor in the Master of Science in Executive Leadership program at the University of San Diego  In 2009, he co-authored a book with Ken Blanchard outlining his effective leadership techniques, titled “Helping People Win at Work: A Business Philosophy called ‘Don’t Mark My Paper, Help Me Get an A.’ ”

Garry holds a certificate in Modern Retailing and wholesale distribution and a Master of Science in Executive Leadership from the University of San Diego.

I am a working progress all the time. I think leadership is not a destination, but it is a journey. For that, I am very grateful.

I think education is when you read the fine print and experience is when you don’t. When you put those two together, you get learning and from that, you get knowledge. I’m very grateful to have the opportunity to learn from people every day and listen to wonderful things they are doing. It is listening to the people around me that brings me thoughts of leadership.

I love what Simon Sinek said: “Leadership is not about being in charge. It’s about taking care of people in your charge.” 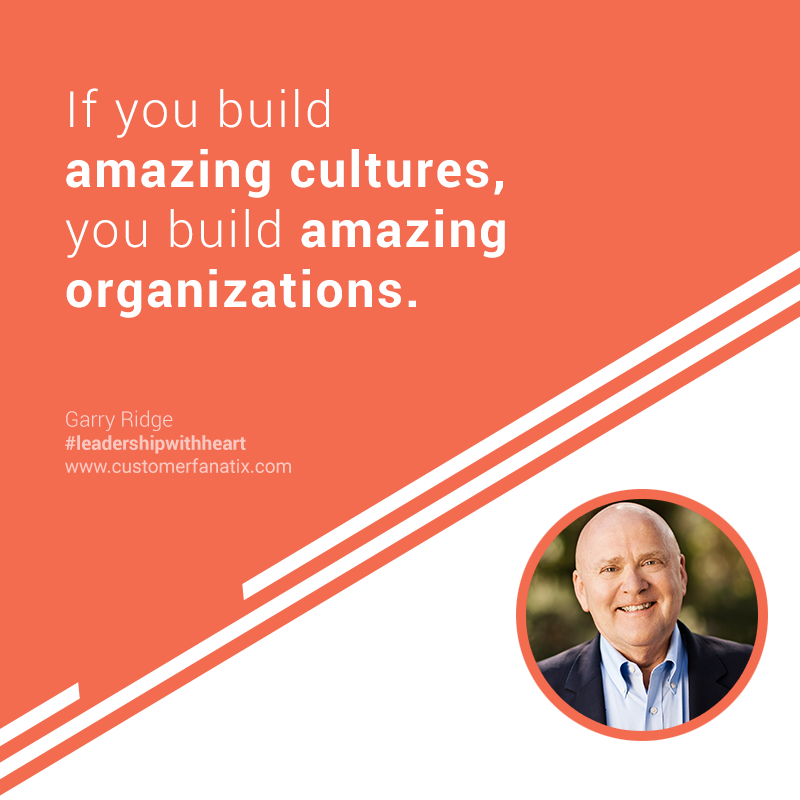 If you don’t know who you are, you’ll never be able to work things out. – @LearningMoment #leadershipwithheart Click To Tweet

Get rid of the ego, adopt empathy, treasure the gift of others, and question why you believe what you believe. These will really strengthen your leadership. – @LearningMoment #leadershipwithheart Click To Tweet

I believe that we can make the world a better place by creating workplaces and cultures where people go to work everyday, where they make a contribution to something bigger than themselves, where they learn something new, where they feel safe and they go home happy.

I also think it’s an absolute sin that we’re creating environments where 65% of the people who go to work hate their jobs. If they go home feeling like that, they are going to carry that inside their homes.

Businesses today have the biggest opportunity ever to truly make a change in the world. Thankfully, leaders are starting to hear it. I love to quote Aristotle who said, “Pleasure in the job puts perfection in the work.” Now, he said that in 384 B.C.

The problem we have is, we must have been very slow learners because what we get are soul-sucking CEO’s in a business exercising toxic leadership and sucking the soul out of people. There’s no pleasure in the job and there’s no perfection in the work.

We’ve been measuring the engagement of our tribe for over 20 years and we’re very proud of the fact that our engagement is 93% globally, and 99% of our tribe members say that they’d love to tell people that they work at our company.

On the same hand, 96% of our tribe members said they respect their coach. Our coach here is like your boss. We don’t have managers or supervisors. We have coaches. We are here to help people step into the best version of their self every day. And it’s awesome to think that they say they respect the person they report to, when most people leave their jobs because they hate their boss.

When I got the opportunity to lead the company as CEO, I took a step back and went, “Uh oh. How do I create a culture of empowered and engaged people?”

What became clear to me was micromanagement was not scalable. So, I poked around and looked for an opportunity to help me understand more of what behaviors and aspects of culture we might like to practice and to see if we can do that.

I went back to school and did a Masters Degree in Leadership. That’s where I met Ken Blanchard. Then, I had a pivoting moment where I said, “I think I understand what has to happen.”

Organizations need to have a clear and dedicated leadership that says it’s all about the people. We need to set a true purpose that people can align with. We need to have values that set people free.

We’ve got to have strategy and tactics to build an economic engine that is able to support the organization, and we really have to adopt a true culture of learning. Then, I started putting it into action and it began making a difference.

As we started to build employee engagement and culture, our economic engine has thrived. – @LearningMoment #leadershipwithheart Click To Tweet

If you build a culture where people come first, and you balance being tough-minded and tender-hearted, then you can build an organization that is remarkably successful. – @LearningMoment #leadershipwithheart Click To Tweet

We are here to help people step into the best version of their self every day. – @LearningMoment #leadershipwithheart Click To Tweet