30: Leaders with Heart Strike a Balance Between Confidence and Humility

Today on the podcast we have Nick Smarrelli, Owner and CEO of GadellNet Technology Solutions. In this episode, we talk about the roots of his leadership, how he merges culture with data and other unique ways that he leads his organization.

The key takeaways in this episode are:

This was a great conversation. Nick may join the show again as there was much more to talk about, but time waits for no one.

Nick Smarrelli is the Owner and Chief Executive Officer of GadellNet Technology Solutions.  GadellNet has offices in both St. Louis and Indianapolis. GadellNet, a 6-time Inc. 5000 fastest-growing company with nearly 75 employees in the Midwest, is a small business outsourced IT consulting firm.

Nick has a degree in Psychology and a degree in Finance from St. Louis University.  He ran National Account sales for Ingersoll Rand before realizing his passion for entrepreneurship in 2010.  Nick is an Ironman athlete, ultramarathon runner, father of 2 (though often 3 as him and his wife foster children as well), and has been a featured technology speaker for chambers of commerce, large national associations, national non-profits, and numerous industry technology conventions.

Nick’s leadership drive came from his parents, which “sounds like an insanely cliché answer.”

I grew up in a world where hard work was forced upon me, this belief that the world is not going to give you everything was ingrained into our soul, that you have to seek it out and find it.

I want to help improve people and I want to help create this community where the community that we serve and our employees and our vision – all of these come hand in hand. 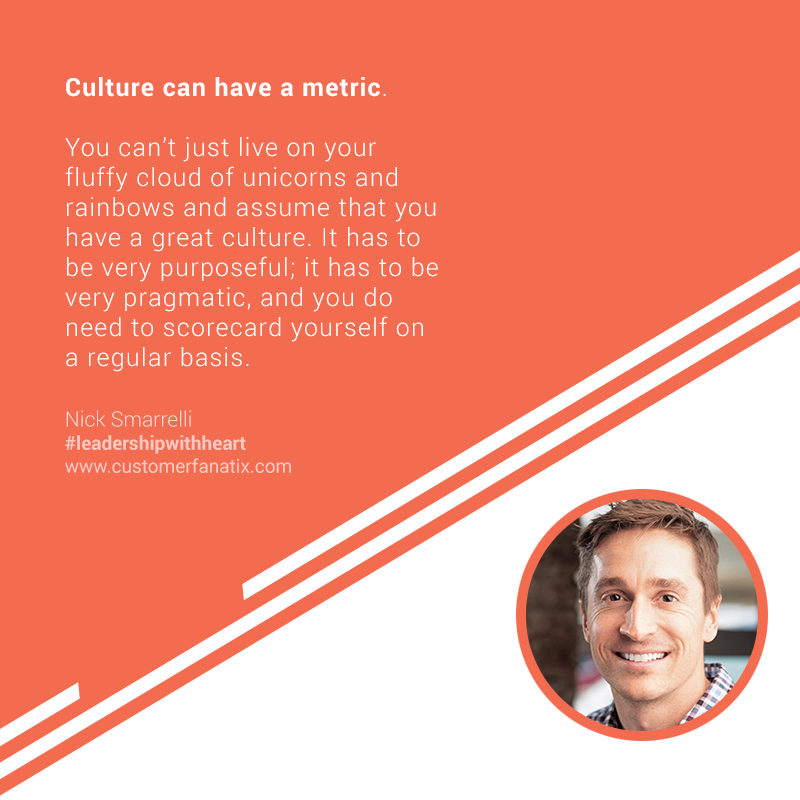 You see the metrics in terms of participation in after-hours events, or participation in using your pto time. We use TINYpulse or maybe Cheers for Peers, where it’s a kind of acknowledging your team for hard work – seeing that go up on a week, those are the things that drive me and help motivate me through those tougher times, because I want to see this culture come alive.

A Culture of Acceptance

As a leader, I’ve become more wise. I realized that sometimes it is OK to have a bad day.

For me, it happens. I can’t even point to a specific event. I’m sure it’d be far more compelling if I could, but it happens. It happens frequently.

And I think one of the things that I’m really happy to be in a culture of acceptance is when that happens, we have a culture that even though given my title, I have an entire organization, whatever layer they are in that organization, that is willing to call me out on that fact.

My responsibility in hearing that is to acknowledge it and say, “I am not, and I apologize for that.”

Leaders do not have to be the best at everything. Hire for that and admit mistakes along the way. #leaderswithheart Click To Tweet

Connect with Nick on LinkedIn