109: Leaders With Heart Often Find Their “Why” Through Their Adversity

In this episode, Heather Younger speaks with Kirk Adams, President and CEO of American Foundation for the Blind about his unique journey as a blind person for most of his life. Kirk shares how his uniqueness frames his leadership style, and a time when he was not the best version of himself.

In a time like today with the coronavirus taking us by storm, Kirk provides an uplifting lesson on how we can move past adversity and shine as leaders. Thanks for listening.
Kirk Adams' Full BIO

Kirk Adams is a longtime champion of people who are blind or visually impaired and is committed to creating a more inclusive, accessible world for the more than 20 million Americans with vision loss.

Adams has led AFB in a new and innovative direction since becoming president and CEO in 2016. A preeminent leader in the field of blindness, Adams frequently serves as a keynote speaker at conferences across the country, informing audiences of AFB priority issue areas that include education, vocational rehabilitation and workforce participation, vision loss and aging, and technology.

Before joining AFB, Adams served as president and CEO of The Lighthouse for the Blind, Inc. Prior to that, he was also general manager of administration and director of public relations and resource development.

Active in his community, Adams was a member of the Governor’s Task Force on Disability Employment and the Seattle Public Library’s Strategic Plan Advisory Committee. He served on the boards of the Aerospace Futures Alliance and the Association of Washington Business. He was also the treasurer and member of the Board of the National Association for the Employment of People Who Are Blind and a board member of National Industries for the Blind.

I think I am really where I should be. I am a totally blind person. I went to school for blind children in Oregon and I “swam hard” to succeed. After that, I entered the world of work and had a wonderful family. But I determined that I should be in a non-profit sector, leading an organization that serves people who are blind.

It became very clear to me that this where I want to spend the rest of my working career, to creating change and systems to eliminate barriers for people who are blind. My organization focuses on systems change and looking at everything through the lens of employment. To be the head of this very unique, historic, and iconic organization in the blindness field gives me a special opportunity to make a difference. 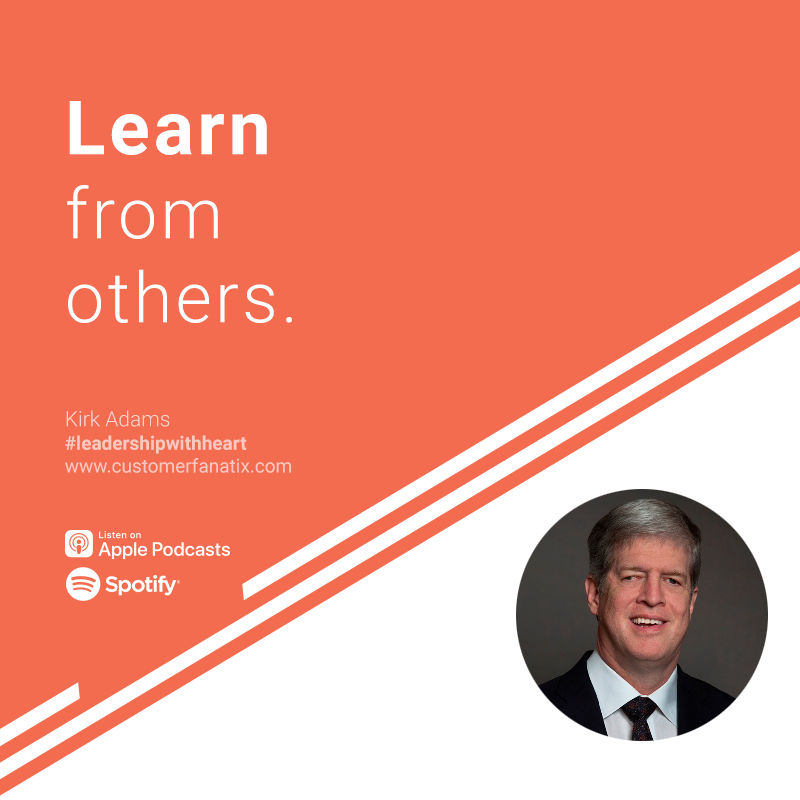 I am driven a lot by thinking of kids, hoping that their life passes smoother than mine way. – Kirk Adams #leadershipwithheart Click To Tweet

It is important that everyone should think about their “why” and ask, “Why am I doing what I am doing?”

For me, I just think back on being a blind child as I talk to parents who are like my parents: parents who have never met a blind person before but have a child who is blind. They are scared and they don’t know where to go.

I talk to parents all of the time. They ask me, “What does the future hold for my child?”

I cannot honestly say that it’s not going to be a struggle. The parents are going to have to do everything right. They have to lead them to right school that has the right resources. They have to go above and beyond all the time to put their child in a position to live the life they want to live. It a very “hit or miss” situation.

If a blind person happens to be born into a family that has resources and advocacy skills, the child can make it. If not, then it gets very hard for people.

I would really like to be able to sit across the table from those parents and say, “No your kid can do whatever they want to do in life. Here are the resources, the pathways, and some examples to do that.” But that is not the kind of conversation I can genuinely have right now.

I want to spend the rest of my working career in creating change and systems to eliminate barriers for people who are blind. – Kirk Adams #leadershipwithheart Click To Tweet

I don’t really believe that I have that many decisions to make. In my team, we talk about goals, roles, and processes.

I am here to support everyone’s success, and make sure that people have the tools and the resources they need to accomplish our strategic objectives.

My job figures a lot of aligning, and ensuring that people are in active mutual support of one another, in each part of our organization as we all enforce and learn.

We have four employee-led values:

Learning. We want to learn all the time from everything we are doing.

Collaboration. We want to be collaborating internally and externally.

Innovation. We need to do things differently in order to get different results.

I want to be clear on who has the decision-making authority, and it is mostly my leadership team. – Kirk Adams #leadershipwithheart Click To Tweet

Connect with Kirk on LinkedIn