94: Leaders With Heart Allow Their People To Discover Their Best Selves

In this episode, Heather shares a personal story about her daughter that highlights what courage and authenticity really look like. She also discusses how leaders need to be the catalysts to create environments that allow people to discover their gifts, and in turn, use those gifts for the betterment of all.

All of you know that I have four children, and my oldest has been a source of inspiration. She has also been a source of stress at times, but more of an inspiration since her birth. She is a kid who struggled with cognitive delays and it caused her to be someone who works really hard to just stay afloat. 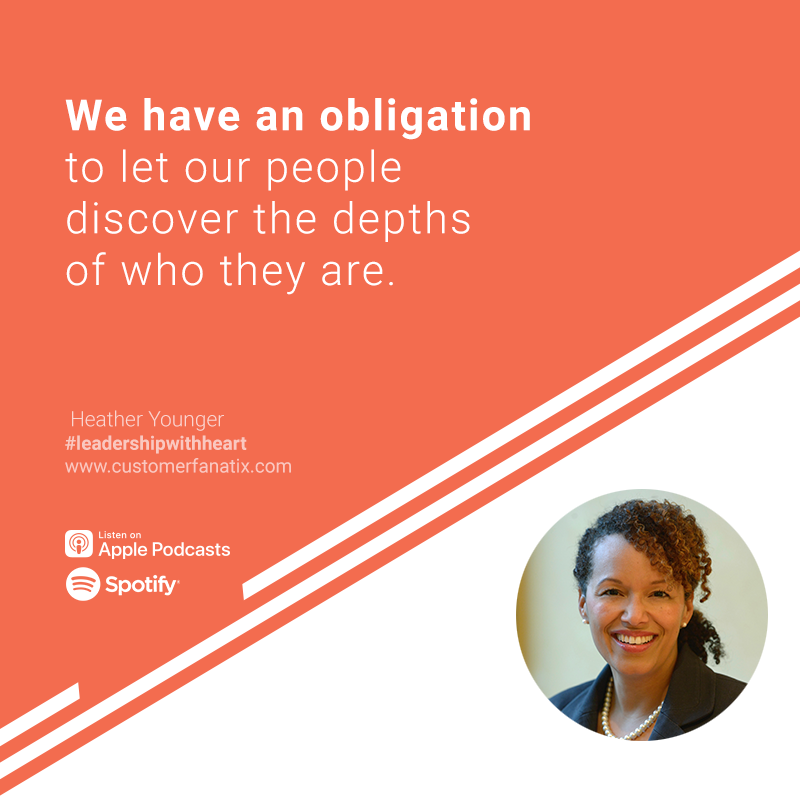 We have to put our people in environments that allow them to stretch outside themselves, their limitations, and where they thought they could go. – @CustomerFanatix #leadershipwithheart Click To Tweet

She selected Malcolm X because the piece talks about getting the point across with people who are not listening. She believed in his lens. My daughter, this person whom we don’t know if she is understanding what is happening, was so crystal clear.

She also said, “There were a lot of things that were against him. A teacher told him that he would never make anything of himself. I felt for him, because over my life, I had people who implied that I wouldn’t go places, and that I couldn’t do certain things. That really spoke to me.”

After she gave the speech, her teacher and everybody else in the room were flabbergasted. It was impactful for everyone because it talked about the truth regarding a large group of people in America.

After three or four days, Her teacher still kept on mentioning her talk in class in a positive light. He even decided to do a unit on Malcolm X for the next semester.

I can’t believe my daughter took the step. I was so proud of her. To be honest, I’m not sure if I would have that courage.

We have an obligation to let our people discover the depths of who they are.

We have to allow our people to have safe spaces, and put them in environments that allow them to stretch outside themselves, their limitations, and where they thought they could go, and not place limitations on them.

When they do, whether they do well or not, we still recognize them for their courage, authenticity, and effort, because those are the things that we value. When we value those things, then we get more of them. As a result, they flourish.

Decide to be courageous in exploring what needs to be explored, in teaching others, and in bringing them to the truth. – @CustomerFanatix #leadershipwithheart Click To Tweet

When we value the courage, authenticity, and effort of our people, we get more of them. – @CustomerFanatix #leadershipwithheart Click To Tweet

SHARE
PrevPreviousWho will recognize employees if not you?
Next95: Leaders With Heart Care For The Whole Person That They LeadNext